Biodiversity and local economy vs. oil

The region of Epirus, in Greece, threatened by the extraction of hydrocarbons 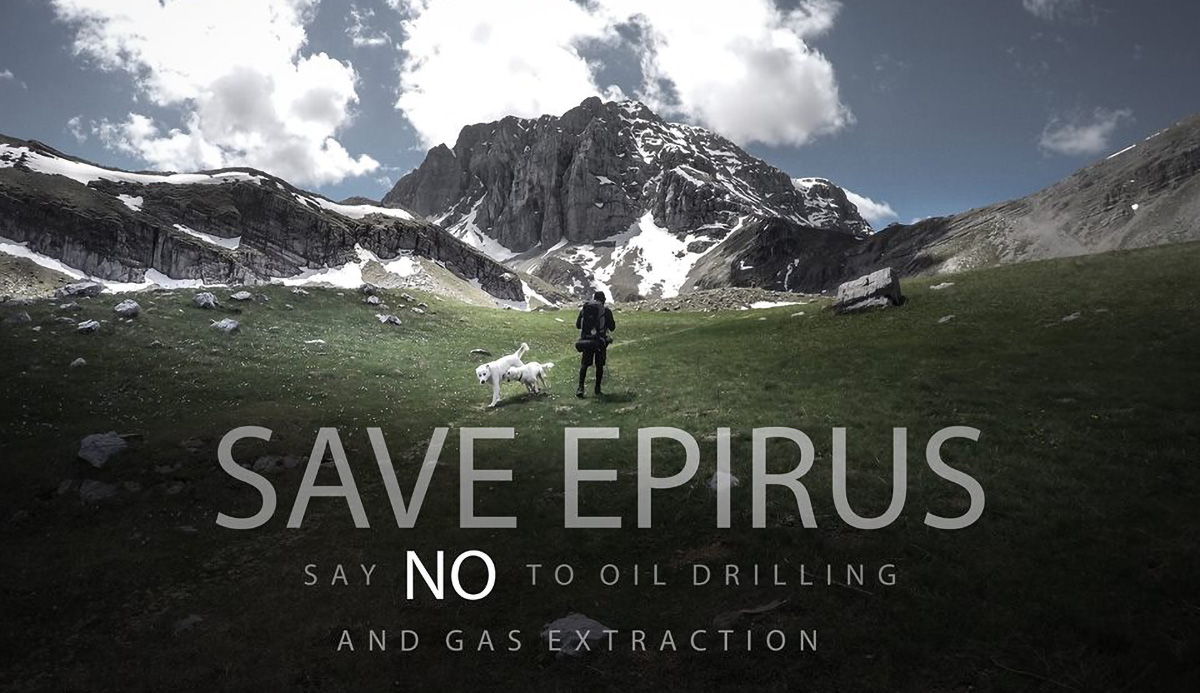 While democracy is the most common form of government in the world today (and, ironically, invented in Greece), it’s no secret that actual citizens have less and less say in the decisions being made that directly impact them and their daily lives. What is going on in our region of Epirus is, sadly, a perfect example of this.

The government of Greece granted permits to two large oil & gas corporations to explore and exploit hydrocarbons in the region. Our group only learned about this in Nov. 2017 when one of us was out mushroom hunting and saw trucks bearing the logos of these companies and did research to see what they were doing in the area. We have since found out that the deals between the government and companies go back to 2014 (including some suspiciously timed legislation which hugely benefits these companies).

One of the least industrialized regions in Europe in danger

This was illegal for a variety of reasons. First, a permit for exploration should be separate from a permit for extraction, and both permits require adherence to established administrative processes. Second, the companies (including Repsol, Exxon Mobil, ELPE and Total) started working without informed public consent or unbiased environmental impact assessments. They have been given the right to prospect for oil and have already started working on seismic testing, cutting huge swaths across public forests and establishing their infrastructure even on private land. During seismic testing they explode dynamite inside deep holes they drill every 50 meters across an area of 500 square kilometers of our land. They have constructed roads and helipads through forests, pastures, farmlands, and vineyards of local residents. Dodona, the oldest Hellenice oracle, Zagori, a network of 44 villages famous for their geological culture (UNESCO World heritage Centre) and biodiversity value (Zagori encompasses the Northern Pindos National Park, part of the Natura 2000 network), and Epirus in general as one of the least industrialized areas in Europe, are all included in the oil & gas exploration plans, putting in peril the entire region's ecology, identity, and culture.

The government did not tell any of the local residents about any of this. We have discovered all of this, and more, through our own diligent research and on-site visits. In fact, the government is actively hiding information from us. Due to the geology of our region, we know that if the companies go ahead with hydrocarbon extraction, they will most likely have to use unconventional methods such as fracking or pyrolysis. But no one in the government or from the companies will admit to that. When asked direct questions, they change the subject (or simply stop the public meeting, which they have no right to do). In short, the government is NOT representing us or our best interests.

Economic benefits are not worth it

Even if we were to only look at potential economic benefits (ignoring all the negative externalities associated with hydrocarbon development), the Greek state comes out the loser as it will take mere crumbs from any potential profits, yet will bear the entire burden of all the frightening risks to the environment and economic activities of the country, which are immeasurable. Hydrocarbon extraction projects which do not leave behind pollution do not exist. We are talking about heavy industrial activities. And contrary to what we are told, the risk of accidents is not small. In America, for instance, accidents (small or large) due to hydrocarbon production and transportation in some cases exceed 150 per year.


And the cost of cleaning up these accidents, in some cases, is enormous. Waterways(seas, rivers, lakes, etc.)can never be completely cleaned, and it takes decades to get them back to a merely viable state. If we were to compare the costs of such accidents to the size of the Greek economy, we can see that any accident could be fatal to an already economically fragile nation. Even a “minor” accident, such as the Refugio Oil Spill along the west coast of the U.S. in 2015, cost $335 million to clean up.


As well, the extraction of hydrocarbons will not help Greece move toward energy autonomy. Any oil or gas extracted will belong to the companies that make the extraction ... Thus, the argument put forth regarding energy efficiency and independence is simply false. To emphasize, commercial exploitation is granted to multinationals while the Greek state, except for specific situations such as war or emergency, will not have access to its own resources. The domestic market will continue to be powered by private hydrocarbon-trading multinational corporations. Therefore, there will be no financial benefit for the general Greek citizen and no political benefit to Greece.


Centuries of symbiotic coexistence with the environment

Epirus is one of the most environmentally, culturally, and historically significant regions of Europe. With our movement, we are also addressing the local and global issues of climate change, biodiversity loss, deforestation, habitat destruction, and ecosystem damage. It is disastrous and irresponsible, economically, socially, and ecologically, to continue investing in hydrocarbons. It is a short-term “solution” to long-term issues (Greece’s economic crises and humanity’s endless need for energy).

What Epirus needs is viable and renewable local development, development that benefits the small, provincial economies while conserving natural resources and considering the benefits and welfare of all the region’s inhabitants. It also needs systematic support of local economies already in place which work harmonizing with nature. As farmers, bakers, beekeepers, mothers, fathers, sons, daughters, wine & cheese makers, shepherds, mushroom gatherers, artists, photographers, eco-tourism specialists, writers, and small-business owners, we know how tied we are to the land, and we appreciate how we exist symbiotically with our surrounding environment. Destroying our land and poisoning our air and water will not be tolerated at any price. Development that sacrifices the environmental heritage of the area, passed down from our parents, grandparents, great-grandparents, and so on, is NOT development at all.